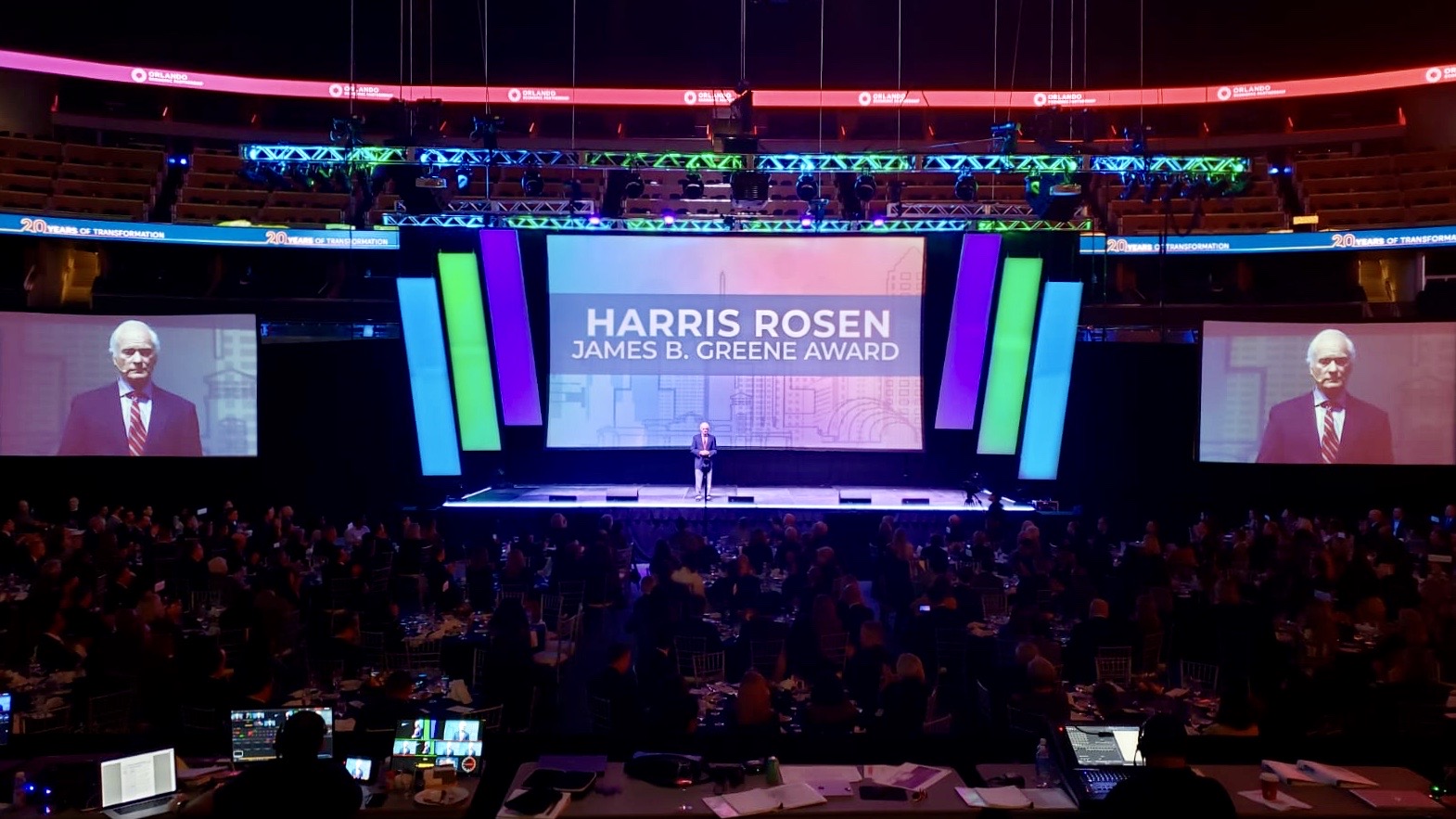 The Orlando Economic Partnership has collaborated with Cybis on a number of high-profile projects over the last several years and considers Cybis to be a true partner in every sense of the word. From stage and event design to on-site show management, scripting, video production and beyond, the final product always exceeds expectations.

Orlando continues to choose Cybis for all of its audiovisual and production needs — Cybis has produced shows all over Central Florida for a range of different organizations. We treat every production with the individual care and attention it deserves in order to exceed the expectations of the audience and our clients.

Over the past five years, Cybis has built a successful, mutually beneficial relationship with the Orlando Economic Partnership. With the many productions of their James B. Greene Awards Dinners, and the Alliance for Regional Transportation Kick-off Event in 2018, Cybis continues to partner with OEP and provide audiovisual support for various special events.

As the Orlando Economic Partnership began planning their yearly paramount event, they knew to put their trust in Team Cybis to produce the 2019 Annual Dinner. To recognize the region’s transformation as well as honor the recipients of the James B. Greene and Schwartz Innovation awards, this momentous occasion took place in the world-class Amway Center.

While this was our first time at the Amway Center, we are proud to have now served major events in all the large-scale venues in Orlando – Hard Rock Live, House of Blues, Dr. Phillips Center, Orange County Convention Center, and numerous Orlando and Disney area hotels.

In the case of OEP’s Annual Dinner, Cybis ensured that every aspect of the event would be a comprehensive and fluid experience. To maintain the night’s high energy, attendees migrated from the upscale reception in the Amway Center lobby to the Arena floor accompanied by upbeat music throughout the Center’s tunnels. The stage, designed by Cybis and built to represent infinite expansion, was beautifully lit; equipped with unique motion graphics; and surrounded by the colorful, custom arena ribbon. To tie the motion graphics to the city, Board members of OEP were introduced by the Orlando Magic’s announcer in front of personalized graphics inspired by the Magic team.

Tim Giuliani, President & CEO of the Orlando Economic Partnership, spoke to the audience of 800 about the state of the organization, state of Orlando, and release of the Orlando Prosperity Scorecard. The night concluded with a speech from Harris Rosen, the 2019 James B. Greene Award recipient, and President and COO of Rosen Hotels & Resorts. Cybis served as the Exclusive Production Sponsor for the event as OEP celebrated the economic progress and community development in the Orlando area.

The Orlando Economic Partnership represents seven counties in Central Florida and is involved in establishing partnerships through networks, supporting businesses, and developing the economic arena of the region. Cybis continues to support these types of organizations that cultivate growing groups and individuals to contribute to the betterment of our society and nation. Cybis produces shows all over Central Florida for a range of different organizations by providing unparalleled audiovisual and event support.