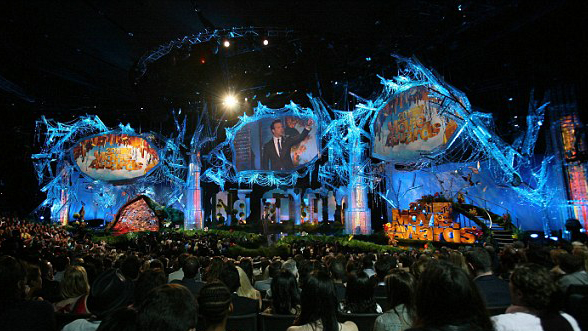 Cybis was given the incredible opportunity to design motion graphic elements for upcoming major films at the 2011 MTV Movie Awards, airing before millions. The rich graphics were featured on-stage during their “World Exclusive Premiere” segments.

Clayton Carter led the project by hand-designing and developing visual textures that were projected across 5 different LED screens built into the amazing stage. The looping textures were featured before sneak peeks of major films like The Green Lantern, Super 8, Harry Potter and the Deathly Hallows: Part 2, and Twilight: Breaking Dawn.

With just over a week to air, Cybis created and delivered dynamic and custom content on a very tight deadline… They were able to transform the screens into various dynamic living environments that could be appreciated by both the live audience and viewers at home! They were just terrific to work with.” -Jane Mun, MTV Movie Awards Supervising Producer

From the billowing smoke and electric plasma streams in The Green Lantern to the subtle rays of sunlight peeking through the branches in Twilight: Breaking Dawn, the rich environments created a pleasing and captivating asset to the overall stage design.

This marks the first time Cybis’ work has been featured by a major television network during a live event broadcast to millions of viewers! We anxiously await another occasion to team up with MTV in the future.

“It was an honor and definitely a pleasure to have a part in such a thrilling, and truly creative event! Armed with only matte paintings and promotional stills from the studios, we were able to bring them to life on screen using some pretty simple, but solid visual effects,” Clayton stated. “For Super 8, we rebuilt the movie poster’s silhouetted ‘skyline’ in front of a turbulent dark sky. Paying homage to J.J. Abrams, we added plenty of his signature lens flares to the scene.”