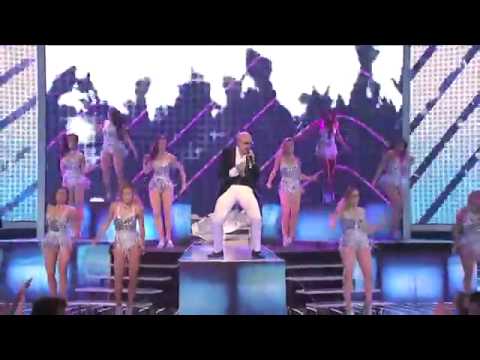 Marking our second major entré into broadcast media, we landed an incredible opportunity through Impulse Creative Group to produce background graphics for Pitbull’s performance on the season finale of X-Factor 2012. Big opportunities often come with big challenges, and this opportunity had its share of obstacles. Namely, it needed to be done in just a few days for rehearsals in L.A. to begin. Oh yeah, and the set design called for seven screens worth of content.

So, we ordered some pizza, strapped on our headphones (and our Pitbull shades) and got to work..

The nearly four-minute performance was set to Pit’s latest hit at the time: “Don’t Stop the Party”. The hip-hop mastermind wanted the visuals to transport the audience to a frosty, ice-like club-scene with a futuristic twist. No problem! Our designs were packed with ice-cold crystals, and chilling color palette contrasted with steamy go-go girl silhouettes and hot lights.

Pitbull and his team at Impulse were blown away – and so was the nation. With just the right amount chill and few blasts of all-out action, the crew at X-Factor said the graphics were some of the best they’d ever seen used on their screens. Cybis debuts on the X Factor with “Mr. Worldwide” in a major broadcast production.